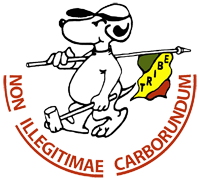 Formed in 1972, Tribe Division was named after Rear-Admiral Raymond Tribe (1908-2005) a former artificer apprentice who rose to flag rank. The division adopted a snoopy-style mascot and used the psuedo-Latin phrase "non illegitimae carborundum" (don't let the bastards grind you down) as their motto. Many divisional members purchased shirts featuring the logo on the left.

Divisional numbers were boosted in the summer of 1983 when half of Lane division were integrated, following that division's closure at the end of the spring term. Tribe division closed in August 1983 and all remaining apprentices then moved to the west side of Fisgard.